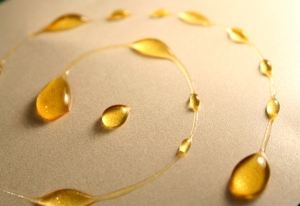 So on Sunday we looked at the sensitive topic of gluttony. We started in an odd place, a discussion of math, statistics, and the inverted U curve.

Here is how Malcolm Gladwell discusses what an inverted U curve is:

We used this framework to begin to talk about gluttony. Gluttony is really about too much of a good thing that becomes a bad thing. So, for example ,some food is good, a middle amount doesn’t really help or hurt, too much gets unhealthy. But the inverted U works for than just food. It also works for working, stress, and a whole host of things. Working is good for health, but too much work (i.e. being a workaholic) becomes incredibly unhealthy for physically and relationally. A little stress is helpful to stay motivated and in the “flow” – too much becomes an ulcer.

The point of the inverted U is things that are good in small to moderate amounts can have really negative consequences in large amounts. And this is actually the same thing we learn from Solomon, the wisest man on earth. He says this, “If you have found honey, eat only enough for you, lest you have your fill of it and vomit it. (Proverbs 25:16)

A little honey is good, it’s sweet, it’s delicious, and it’s good for you. Too much honey will make you vomit. The logic of Solomon is really clear: gluttony is really about too much of a good thing. It’s about a lack of moderation and balance. Most things in life are only good in moderation, overabundance or overconsumption leads to difficulty. This is true in all sorts of things. Work is good, being a workaholic isn’t. Being flexible and saying yes to things is good, being a doormat isn’t. Watching TV is relaxing, watching 16 hours in a row is a rut. Having some “me time” by yourself is great, doing it so much you disconnect from your family is a bad thing. Buying new shoes can be fun, buying 100 pairs and drowning in debt isn’t.

The point is that gluttony isn’t just about how much we eat, but how we live. And there are things in our lives that are a good thing, but that without discipline, quickly become a bad thing.

So on Sunday to make this personal we asked ourselves one question: Is there a good thing that has become a bad thing in our lives? Is there something good that has become too much and become bad?

So that’s what we learned on Sunday but hopefully it isn’t something that we just learn about – but practice. Because the truth is we feel better when we are in the middle – enjoying a little honey but not so much that we throw it up.

Big Idea: Gluttony is about a lack balance and moderation

Adult / Group Discussion Questions: What stuck out to you from the sermon? What was challenging to you? How did God speak to you through it? What was new?Have you ever thought of gluttony not just in terms of food? What are maybe some “good things” that have become unhealthy things? How can you start to get some more balance in your life? How can God help you find moderation? Last but not least – can you give it up for Lent? If so who can help to encourage and cheer you on?

Discussion Questions / Actions for Young Families: Today talk to your kids about the sin of gluttony. Why not actually act out the verse? Have the kids taste some honey and how good it is. Ask them what might happen if they were to eat the entire jar of it right now. Share with them how Solomon says they’d throw it all up – and how there is a lot of good things – that too much becomes a bad thing.

Challenge for this Week: Give up on good thing that has become a bad thing