Here is a confession. I didn’t want to preach on Sunday. 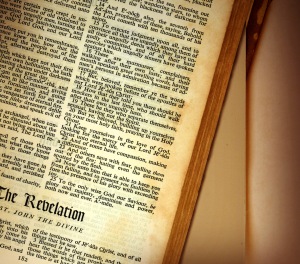 I know, weird right, because preaching is kinda my thing. And I don’t have a lot of other “things”. I can’t really build anything, play sports, or have any musical skill. But what I can do is preach, and I love to preach…well except I didn’t want to.

In fact, I thought of skipping Sunday’s passage, of making Dave preach on it, or calling in sick. The reason is because the letter out of Revelation for this Sunday – is just plain difficult. I was tempted to skip it or to just focus on the parts I liked. But that’s not preaching, and that’s not my calling. To get a sense of what I’m talking about take a read of Revelation 2:18-29

“Write this letter to the angel of the church in Thyatira. This is the message from the Son of God, whose eyes are like flames of fire, whose feet are like polished bronze: “I know all the things you do. I have seen your love, your faith, your service, and your patient endurance. And I can see your constant improvement in all these things. “But I have this complaint against you. You are permitting that woman—that Jezebel who calls herself a prophet—to lead my servants astray. She teaches them to commit sexual sin and to eat food offered to idols. I gave her time to repent, but she does not want to turn away from her immorality. “Therefore, I will throw her on a bed of suffering, and those who commit adultery with her will suffer greatly unless they repent and turn away from her evil deeds. I will strike her children dead. Then all the churches will know that I am the one who searches out the thoughts and intentions of every person. And I will give to each of you whatever you deserve. “But I also have a message for the rest of you in Thyatira who have not followed this false teaching (‘deeper truths,’ as they call them—depths of Satan, actually). I will ask nothing more of you except that you hold tightly to what you have until I come. To all who are victorious, who obey me to the very end, To them I will give authority over all the nations They will rule the nations with an iron rod  and smash them like clay pots. They will have the same authority I received from my Father, and I will also give them the morning star! “Anyone with ears to hear must listen to the Spirit and understand what he is saying to the churches.

Do you see the reason why I wasn’t excited to preach? I mean this text is so harsh, so difficult, and…judgey.

But here is what I realized…that the portions of the Bible that I react strongly against…often have the most to teach me. That my reactions reveal more about me, and what I need to learn.

So while I wasn’t initially excited (more like dreading) preaching this passage I now know better. That in the difficult passages we have the most to learn, and sometimes the learning can be tough. But often the tough things in life pay off most at the end…

So read the passage, take notes of your feelings, think about how you would preach it and come Sunday we’ll see what God has to speak through it.

2 thoughts on “A Difficult Passage to Preach”