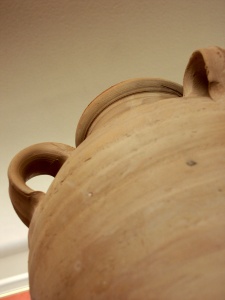 I love monks. There, now you all know. The following story shows why, it’s a story about Abbot Moses and he shows the depth of his connection with Christ by these actions.

A brother committed a fault. A council was called to which Abba Moses was invited, but he refused to go to it. Then the priest sent someone to say to him, “Come for everyone is waiting for you” so he got up and went. He took a leaking jug, filled it with water, and carried it with him. The others came out to meet him and said to him, “What is this Father?”. The old man said to them, “my sins run out behind me, and I do not see them, and today I am coming to judge the error of another.  When they heard that, they said no more to the brother, but forgave him.

Beautiful isn’t it. So since we all leak – who should you forgive today?